Recognition from BP for our degassing work at the Castellón refinery

Our Environmental Services team has been recognized by BP for its positive contribution to the environment, specifically throughout 2021 with the treatment of gases from asphalt tanks at the refinery facilities located in Castellón.

Our Environmental Services team has been recognized by BP for its positive contribution to the environment, specifically throughout 2021 with the treatment of gases from asphalt tanks at the refinery facilities located in Castellón. 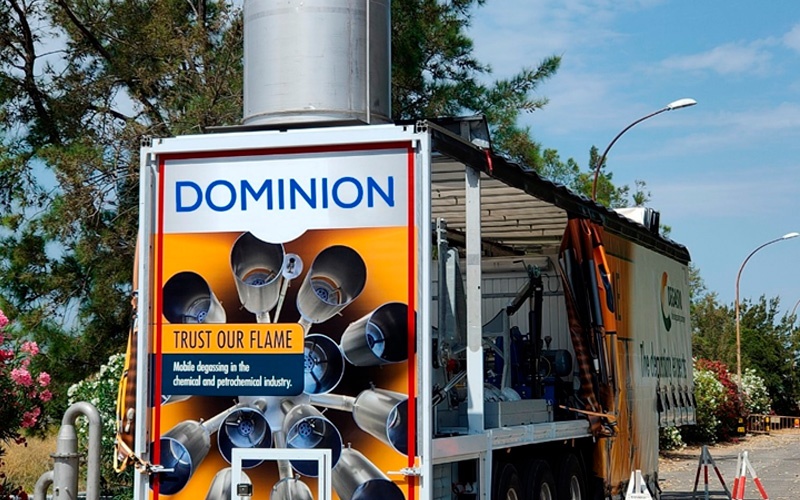 Due to a scheduled shutdown at BP's coke plant in Castellón, the stream of hydrocarbons that is normally processed had to be stored in three asphalt dams. As it was a stream of hydrocarbons of high temperature, there was the possibility that these tanks would emit gases into the atmosphere and produce odors that were harmful to health.

BP decided to rely on DOMINION for the installation of a mobile degassing equipment that would prevent the emission of these gases and eliminate them during the entire shutdown. In order to carry out this project, we also assume the standards and objectives set by BP included in the environmental training plan, where it is intended to ensure that all people are aware of the importance of compliance with the environmental policy, objectives and procedures and the effects potential in the environment from your work activities.

Our team installed a portable gas combustion system to achieve the degassing and elimination of odors derived from the segregation of FVPS to the asphalt tanks during the general shutdown of the Coke unit in 2021.

The process was applied during the filling, emptying and operation of the TK-1400/1401/1402 fixed roof asphalt tanks, located at the BP Refinery – Castellón.

BP wanted to prevent odors and VOCs (Volatile Organic Compounds) from being emitted into the atmosphere during the filling process of the asphalt tanks due to the high temperature of the product. For all these reasons, they asked us for technical assistance for the construction and design of a gas evacuation collector for the three tanks. As well as the subsequent installation during the entire operation of filling and emptying the tanks, of a portable degassing equipment.

The process was a success since a similar operation had never been carried out and it was something new within the refinery. Since the equipment worked correctly and we were able to eliminate all the gases that were produced during the entire operation.

The client has publicly awarded and recognized us for our environmental commitment and for our excellent contribution in reducing VOC emissions into the atmosphere, which are harmful to health. Thanks to our gas treatment and elimination technology in a closed system, complete gas treatment has been guaranteed, minimizing the possible impact both on the environment and guaranteeing the safety of the equipment.

Recognition from BP for our degassing work at the Castellón refinery

Interior and exterior cleaning of tanks for Cepsa